A marvel of recording history, still glittering sixty years on. 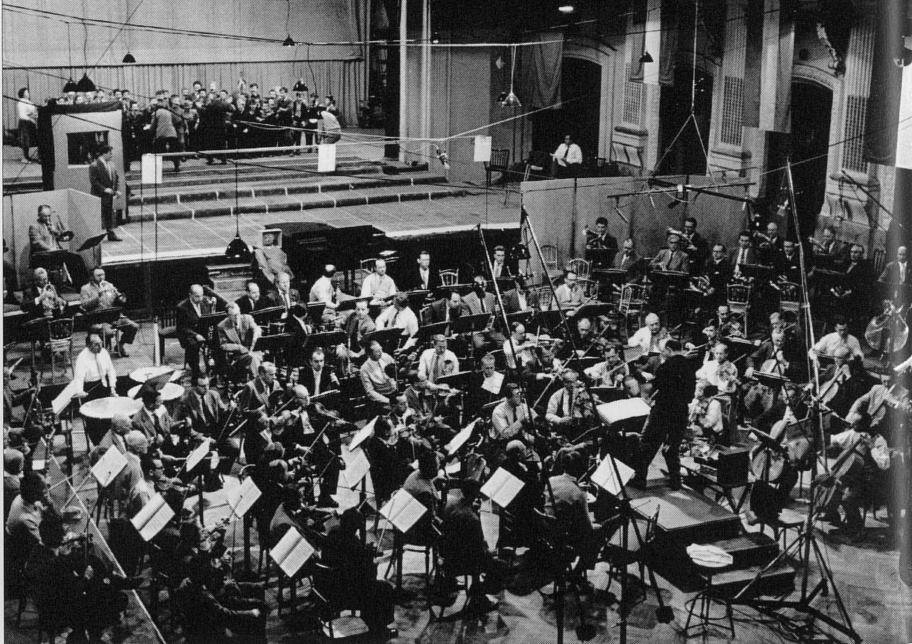 “The artists were rolling in, the rehearsals started, and we had to get out of the clouds and on with a job of work.”—John Culshaw, Ring Resounding.

On this date in 1958, sixty years ago, the Vienna Philharmonic Orchestra, a cadre of the great Wagner singers of the post-war era, conductor Georg Solti (not yet Sir), producer John Culshaw, and the technical marvel known as the Decca Boys went into the Sofiensäle in Vienna to begin their stereophonic recording of Wagner’s Das Rheingold. Hitherto unrecorded in such a format, it represented a huge risk for all involved. Culshaw’s still-thrilling account of the process, Ring Resounding, depicts the sense of trepidation and occasion leading up to the first sessions:

As September 24 approached, there was a feeling of tension unlike anything I had experienced. We were going flat out for something new and untried, and a lot of money was about to be spent. There was the usual nagging feeling that something might go hopelessly wrong and put us two sessions off schedule; there was also the feeling that whatever we did, Rheingold might be a failure. There is always the serious possibility with a recording (or a film or a play) that no matter how much heart everyone puts into it, there may simply not be enough people in the world sufficiently interested in the result to justify the expense.

The attempt was not the first. At Culshaw’s insistence, Decca had recorded rehearsals and performances of the Ring under Knappertsbusch at the first post-war Bayreuth Festival, anticipating a full release of the complete work on LP. The quality of performances (and a likely contractual halt from EMI’s éminence grise Walter Legge, whose wife Elisabeth Schwarzkopf was a member of the cast) snared the dream of a full release at the time. (The recording of Götterdämmerung from that set has, however, been issued on the Testament label.)  Nevertheless, the dream persisted, and after moderately successful 1957 studio recordings of acts 1 and 3 of Die Wälkure with Kirsten Flagstad (with the Todesverkündigung scene from act 2), the Decca repertoire committee committed to a recording of Das Rheingold in 1958.

The choice was somewhat reckless. Rheingold, as the “fore-evening” (Vorabend) of the Ring, is hardly a stand-alone work, and indeed it is hardly produced outside of the rest of its Ring siblings. Its staging challenges are legion, everything from the Rhein river, to giants, to serpents, and rainbow bridges. Yet such a work had no studio or stereophonic recording in any company’s catalogue, and it encompassed enough technical challenges to make it a viable project for the company.

Such an inauspicious project managed to attract a range of talents. Solti’s recording career was beginning to take flight (he had helmed the act 3 Walküre with Flagstad) and within a few years he would be at the head of Covent Garden. Of particular value to this recording is its cast. As Culshaw wrote at the end of his liner notes for the LP release, “there would be little chance of assembling a cast of this caliber on the stage today, but there may be some point in trying to establish a standard on records, not only because the special conditions enable you to try for musical perfection, but because stereophonic recording is a medium in which great performances may be produced with dramatic impact.” Two of the singers were Wagnerian champions. Gustav Neidlinger was secured as Alberich—at the time intended to be his farewell to the role—and a still-vibrant Set Svanholm, once a reigning Siegfried, as Loge. Culshaw elected for a young George London to sing Wotan, befitting the god’s youth before the more mature strains of the character appear in Die Walküre and Siegfried.

The casting of the Norwegian Wunder Kirsten Flagstad in the role of Wotan’s spouse Fricka (a role she never sang onstage) was lynchpin on many levels but another gamble.[1] Her credits, of course, were beyond compare. The foremost Wagner soprano of the 1930s, Culshaw had hoped to convince her to commit to a recording of the Ring as Brünnhilde. Yet her age, health (her life was eventually claimed by bone marrow cancer), and trepidation about recording a major Wagnerian role after the debacle of the EMI Tristan in 1952[2] left such a dream unfulfilled. An American press leak about her involvement almost shelved the project, but Culshaw’s determination as producer saw her through.[3] Still, there was trepidation. The Decca method of intensive piano rehearsals prior to a full orchestral session was misconstrued by some members of the cast as an indulgence for the project’s grand dame, but Flagstad’s professionalism soon put them back into place. She did not suffer fools. Or those who thought she hailed from Sweden.

The evening before the first session, Culshaw and Solti ran into rival producer Walter Legge in the bar of the Hotel Imperial. Two days of piano rehearsals had gone well, and the mood was somehow buoyant. The project was now common knowledge in Vienna, but Legge, a formidable but esteemed rival, feigned ignorance as to what was about to be undertaken. When the duo told him, he simply said, “very nice, very interesting. But of course you won’t sell any.” After its release in the U.S., it inexplicably shot to the top of the Billboard charts along with Elvis and Pat Boone. (Strange company for Wagner, to say the least.)

The session on September 24 began at 1500. (The Vienna Philharmonic maintained a vigorous schedule that fall for Decca, recording Beethoven symphonies in the morning and Rheingold in the afternoons, all before playing another full opera that evening at the Wiener Staatsoper.) First up was a test passage for the orchestra, the descent into Nibelheim that formed the transition between scenes 2 and 3 of Rheingold. The version eventually recorded for the release was the first to meticulously observe Wagner’s detailed scoring for eighteen anvils of varying sizes. (The same goes for the seven harps required at the work’s conclusion.) The real meat of the session consisted of scene 2 with George London, Claire Watson, Walter Kreppl, and Kurt Böhme, rounded out by a radiant Flagstad, who gave all naysayers (and some members of the VPO) a double-take with the scene’s opening and impassioned exclamation, “Wotan! Gemahl! Erwache!”

Unbeknownst to all in that moment, it would expand into one of the greatest achievements of the recording industry: the first complete stereo recording of Wagner’s Ring. Others have come and gone, some better, some worse, but there’s always a magic in those LPs unlike anything else. Decca’s Rheingold was my entry to the Ring, and it’s still my favorite recording of the work. Quixotic without presumption, it still rivets. Having checked out the first CD release from my county library in high school, I was dumbfounded to learn that the project had be undertaken in the 1950s. The sound, the voices, the orchestra, the drama—all of it had the clarity and freshness that it seemed to be a product of yesterday, that its vitality lived on in its own unique recorded time. Like Wotan’s Valhalla of the drama, it was a dream constructed by seemingly unsustainable means, but unlike the god’s heavenly palace, itself, its spirits, and its power linger on.

Coda. One of the glories of this recording are Neidlinger’s laughs, an element which can easily topple over into hamdom on record. His are all controlles, however, all power, all evil. The malice in his chortle in scene 4 after “Bin ich nun frei?” is curdling. There’s even a motivic interpolation in his offstage laugh in the transition between scenes 1 and 2. Wagner wrote the exhortation in the stage directions, but Neidlinger’s delivery mimics the thematic idea associated with the Nibelungs hammering. Genius.

[2] It got out that Schwarzkopf had “substituted” for Flagstad for Isolde’s high Cs during the studio sessions.

[3] It wouldn’t be the final casting challenge. Along with occasional MIA singers, the casting of the Rhine Daughter Wellgunde became undone at the last minute and Hetty Plumacher was deputized following an appendix operation, one story which Culshaw left out of Ring Resounding.

"Not by wrath does one kill but by laughter. Come, let us kill the spirit of gravity!" –Nietzsche